Annual My Breast Friends run is back for its second year 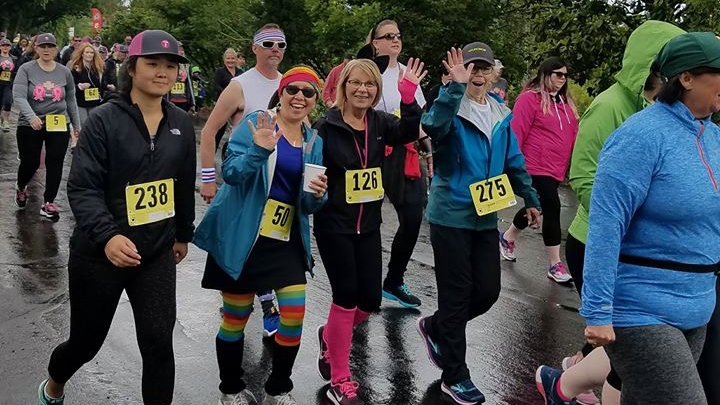 After exceeding last year’s fundraising goal, the My Breast Friends 5K/10K fundraiser, benefiting Oregon Cancer Foundation, will return on Saturday, June 8, for its second year. The race will be held at 10 a.m. at Alton Baker Park in Eugene, in honor of cancer survivors.

“The day you are diagnosed, you are a survivor,” says event organizer and breast cancer survivor Kelly Barton. “Anywhere that you are in your treatment or your recovery, I would like for you to join me at the front of the starting line and walk with me.”

A colorful distraction during treatment
Kelly was diagnosed with breast cancer in January of 2018. It was in the midst of chemotherapy that Kelly’s friends suggested she plan a 5K as a positive distraction from her treatments. The inaugural My Breast Friends 5K was a major success, garnering an exceptional amount of community support and raising $13,000.

Wanting the money to stay local, Kelly chose to donate all the proceeds from the event to Oregon Cancer Foundation.

“When I first approached OCF, I didn’t know anything about them. Over the last year I’ve learned what they do and it’s amazing—there’s such a need for the support and assistance the foundation provides to survivors, their families and their caregivers,” Kelly says.

More fun planned for 2019
An avid marathon runner, Kelly has added a 10K to this year’s event, knowing that serious runners in Eugene would like the option to do a longer run.

“There is also going to be a ‘Why Station,’ where people can write the names of people who inspired them to participate, or bring photos of people who they are honoring,” Kelly says. “So, maybe it’s somebody who is in treatment right now, someone who is a survivor, maybe they’re participating in memory of someone who is no longer with us. I’m really excited about that, because I think that it’s going to be really powerful when we are crossing the finish line to see those names and photos.”

This year’s event will also feature a silent auction from 8:45 a.m. to 9:45 a.m., as well as a raffle for a pair of tickets (floor seats) to the Garth Brooks Stadium Tour concert at Autzen Stadium on June 29. Raffle tickets can be purchased at the My Breast Friends 5K/10K event for $10.

With the help of friends, family and generous sponsors, including Kelly’s employer Timber Products Company, she is looking forward to another successful year and hopes to raise $20,000 to support OCF.

“I think it’s going to be just as emotional as it was last year and just as exciting,” Kelly says. “There was such a positive vibe last year, it was such a fun event. We are recreating the ‘80s theme this year and participants are encouraged to dress the part.”

Join us!
Oregon Cancer Foundation is so appreciative of Kelly, and everyone involved in the My Breast Friends 5K/10K, for supporting the foundation’s mission to provide financial assistance, support programs and education to local cancer survivors.

Early registration for the event is $35 for the 10K and $30 for the 5K, with a $5 discount per person for groups of at least eight people. On race day, $5 is added to each entry. Register for the race and learn more here, and check out the event’s Facebook page.