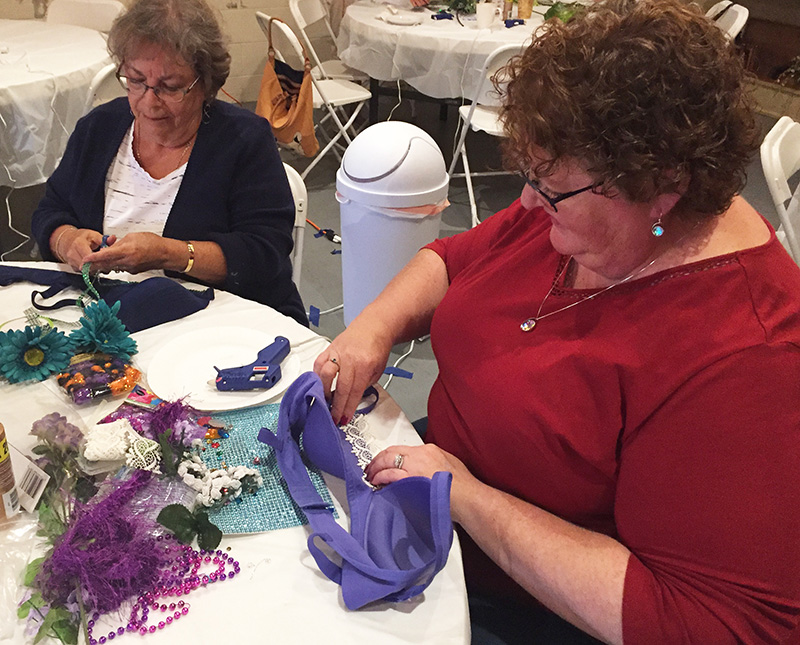 Robin Gambino stood in front of a television news camera a year ago and was asked why she participates in the Bras for Cause Build-A-Bra event. As a colon cancer survivor, she explained, this annual fundraiser supports Oregon Cancer Foundation’s Patient Assistance Program and is a way for her to help others while coping with her own diagnosis. Robin also encouraged other survivors during the interview: “Just stay strong, have a positive attitude and don’t let it get you down.”

Those are words Robin lives by, and it’s why she’s participating in this year’s Bras for Cause campaign and recently attended the Build-A-Bra kick-off event with her family. Nearly four years into her cancer fight, Robin decided to create a bra design that features a pair of boxing gloves, alongside the names of those close to her who’ve been diagnosed with the disease, including her mom and dad. In addition to the fun and camaraderie that this community fundraiser brings, Robin says the event also gives her strength.

“It means a lot to be here and it’s uplifting and inspiring to know that people are here because they want to help,” Robin says. “I choose to fight. I have a bucket list of things I want to do, and, by goodness, I’m going to accomplish them.”

Coming up next
Now that all the bras have been created for this year’s Bras for Cause fundraiser, it’s time to rally the community to vote for their favorites. Voting happens Oct. 1 – 31 online at brasforcause.org. $1 = 1 vote and you can vote as many times as you’d like.

Creations revealed
Come see all the colorful bra entries on display at the annual Reveal Party at Dandelions Flowers & Gifts on Tuesday, Oct. 3. This event is free to attend and fun for the whole family.

This year, more than a dozen area businesses are building a bra and raising funds to support Oregon Cancer Foundation throughout the month of October. These bras will be available for viewing online at brasforcause.org, while the actual bras will be on display at each of these locations:

Don’t miss the fun finale
Bras for Cause culminates with its first-ever Girls Night Out celebration. Grab your girlfriends and celebrate at this woman-inspired event with dinner, music, a silent auction, games and a fashion show, featuring bras created by area businesses and modeled (over their clothes) by local cancer survivors.

This is the sixth year for the Bras for Cause fundraiser. Participants gathered for the Build-a-Bra event at Along Came Trudy in Springfield, where they created their bras, using craft supplies and drawing on inspiration from their personal stories.

Gail Murray wanted to be part of the fun and support her friend Sherry Heinl, a three-year breast cancer survivor who was diagnosed with colon cancer last November.

“This is such a fun event, something we wanted to do together,” Gail said.

“It means a lot to me to see the community rally together,” said Sherry, who personally understands the financial strain cancer can cause.

A few tables away, Brenda Mills, a breast cancer survivor, experienced Build-a-Bra for the first time, creating a bra with her Breast Care Team from Northwest Surgical Specialists, the presenting sponsor of the event.

Brenda was unable to work during her cancer treatment, which included chemotherapy and surgery. She received financial assistance from Oregon Cancer Foundation to help pay her rent.

“I was among some of the strongest women in the world today at Build-a-Bra,” she says proudly. “Not only were we able to come together for such a great cause, raising money that stays in our community, but we know that money is helping patients during a time in their lives that is both emotionally and financially difficult. We are truly blessed to live in a community where there is help, and there is hope.”