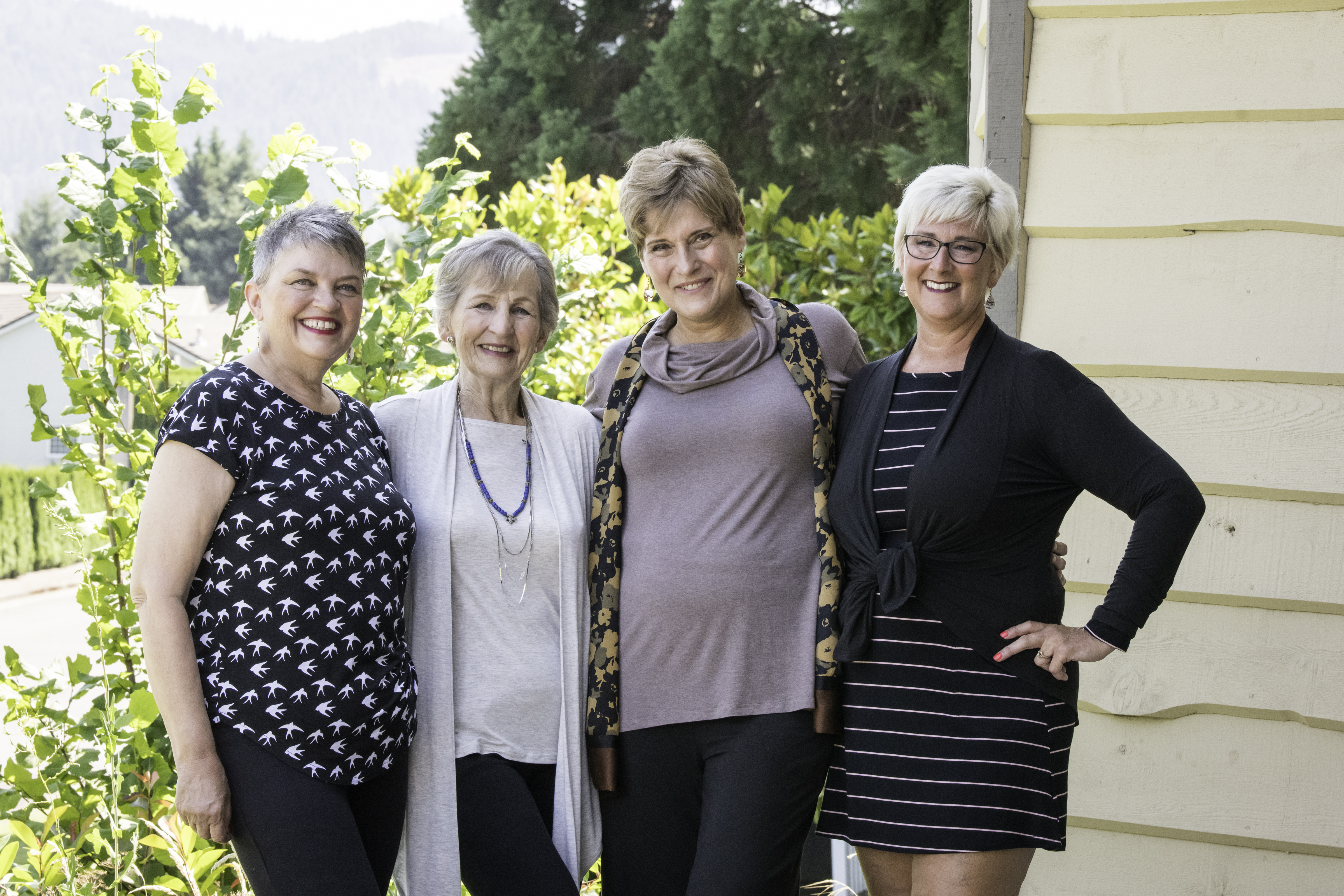 When Oregon Cancer Foundation hosts its annual Girls Night Out Celebration on November 8, 2019, it will honor nine Lane County women as the event’s Red Carpet Survivors. For honorees Joan Schryvers and Joan Canty, Girls Night Out – the finale of OCF’s Bras for Cause campaign – is an opportunity to celebrate their strength and perseverance in the face of cancer, and to offer hope and inspiration to other survivors in the community.

Joan Schryvers
Grace and gratitude – that’s how Joan Schryvers stayed positive after her breast cancer diagnosis in 2017 and through the surgery, chemotherapy, and radiation treatments that followed. Whenever she received news about her cancer, whether it was positive or not-so-good, Joan always made sure to be grateful to her doctor.

“I just decided that whatever was happening, I wanted to look for grace and gratitude,” Joan says. “You have to follow the process; you can’t fight it.”

Joan also used humor to cope throughout her treatment, like when she lost her hair and joked that her oncologist was her hairdresser. She even made him a mug that said, “My oncologist does my hair.”

“Cancer is not funny and not everybody laughs – there are ways that it’s awful,” she says. “But, it’s a ‘screw cancer’ thing. If there is a way that I can find humor, I do it.”

It was not only Joan’s outlook that helped her but also the tremendous amount of support she received from family and friends. Her daughter, Megan, drove her to surgery and sat with her through her chemotherapy appointments while her sons regularly sent her supportive messages to bolster her spirits.

Joan is also thankful for the support she found online. When she decided to share her diagnosis on Facebook, she was overwhelmed with tremendous love and support. Joan even created a private Facebook group, where she could share what was going on in more detail, providing her a comforting outlet.

After her diagnosis, Joan worried about the future and whether she would get the opportunity to become a grandmother. She now spends time with her adorable grandson, Henry, and cherishes every minute they have together. Joan regularly attends OCF supports groups and is thrilled to be a part of Girls Night Out, which she will be attending with her daughter.

Joan Canty
For Joan Canty, life falls into two periods: B.C. and A.D – Before Cancer and After Diagnosis. The retired English instructor was diagnosed with cancer of the tongue in 2018 and underwent chemotherapy and radiation at Stanford University. Adjusting to life after cancer has been challenging for her, but it’s made her realize what truly matters.

“You don’t go back to the way it was,” Joan says. “There is no picking up life without a hitch. You are always more aware of what’s important.”

When Joan returned to Lane County following her treatment, she connected with Oregon Cancer Foundation, which has helped her pick up the pieces of her life that cancer disrupted. Joan has been involved in support groups through the foundation and is grateful to be involved in Girls Night Out.

“As a cancer survivor, it’s exciting to take part in this event,” she says. “Linking up with other survivors and relatives and swapping stories, just getting to know people, really helps.”

Joan believes that events like Girls Night Out are critical for providing a better understanding of the impact of cancer.

“Girls Night Out raises public awareness, as it raised mine,” she says. “So many of us – men and women alike – are diagnosed with cancer. It used to mean a death sentence. Now, it’s more of a disease you can deal with.”